Summer is approaching, the summer sports marketing campaign brands are also about to kick off. It is understood that several major brands to invite their own signed NBA players to China to carry out activities, will be a big show this summer. Nike from the international brand camp, Adidas, with the Peak from Quanzhou, Anta, Jordan, Lu You, and domestic brands Li Ning, about to perform on the same stage. 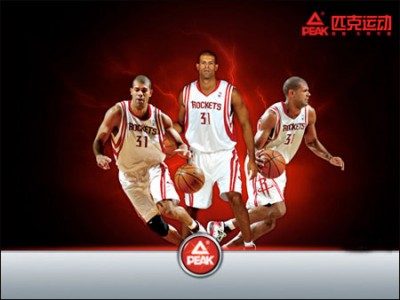 First of all, is about to enter China in the near future Jordan Sports Co., Ltd. Recently signed Rockets captain Chuck Hayes. Huang Tao, director of Jordan's brand, said Hayes will be July 2 - July 9 in Beijing, Shenyang, Xiamen and Shenzhen and other places with local fans, media and distributors for a series of colorful interactive activities, start One week or so of Hayes's "extraordinary" trip to China. It is reported that in a week-long trip to China, Hayes will successively in Beijing, Shenyang, Xiamen and Shenzhen with the majority of fans and media friends to meet. He will also visit Jordan Sports's R & D center and factory, and will also undergo rigorous professional foot testing at the R & D Center, which will provide the most important basis for the design and production of Hayes personal boots. Hayes will wear Jordan Sports this fall, wearing exclusive sports boots tailored for the NBA NBA season.

After Hayes, Steve Nash, NBA preempted NBA point guard and two NBA Most Valuable Player awards signed earlier this year with Luyou (China) Ltd., will come to China with fans at the end of July interactive. Officials at Luyou Company said although Nash's China travel plan has not yet been finalized, the activities of Nash's China tour in late July will certainly not disappoint China's Nash fans. Among them, Lu You and Nash co-sponsored the Chinese children's sports undertaking charity "Luyou Nash loving playground" program for young designers and sports fans in China's "Nash logo design competition" program, and fans of the game interaction and business The visit will enter the deployment area Lu Friends.

Last year, Kevin Garnett, NBA fourth rebounder winner, formally served as Anta's image ambassador. In August last year, he went to Beijing, Quanzhou and Shanghai to join hands with Anta in a series of basketball themed events. According to Anta relevant responsible person said Garnett will still come to China this summer, but the specific time and walking the city has not yet finalized. However, before Kevin Garnett's visit to China, Anta's other signing star, the Rockets' Luis Scola, had already landed in Beijing on May 22nd and launched a weeklong "Antasco China Trip" . Scola trip to China through Beijing, Guangyuan, Chengdu, Xi'an, Nanjing five stations. At Beijing Institute of Technology, Scola also joined hands with CBA Guangdong team player Liu Xiaoyu to smash 16 basketball records in 1 minute to become the Guinness Book of World Records.

Into August, Chinese fans will usher in the largest group of NBA star visited China - from the Peak signed a number of players composed of "Peak TEAM." It is reported that this summer its contract number of NBA players to China is still 6, including members just this month to help the Mavericks NBA championship leader Jason Kidd, as well as Chinese fans are familiar with Sean Battier Other stars. Hou Lidong, manager of Media's public relations at Peak Media, said the "2011 Olympic Star China Tour" is scheduled to begin on August 4. At present, the exact time and details of each star's presence in China are not yet fully promulgated, but will basically last year's content.

According to reports, last year's 6 Olympic signing stars visited a total of more than 20 cities nationwide. In addition to the star's boots launch conference and media meeting, the most popular fans are the "City Events" project, which includes the fans Carnival activities, the city signings, Pick attitude camp and charity auction and donations and other activities .

International brands are also unwilling to be lonely

As domestic brands continue to launch their own heavy star to grab the impact of the domestic market, Nike and Adidas these two sports brands it "big brother" in recent years have also sent their masters "Hua Dan" to increase the Chinese market in China Of the promotion, the Chinese market has become their indispensable main battlefield.

"I worship Bruce Lee, his Kung Fu theory is very valuable to my sport." Bryant's activities in China often mention Bruce Lee. Bryant is Bruce Lee's "fans", which is an open secret, Nike launched the "Bryant Five" signature shoes, there is a pair of Bruce Lee Memorial Edition shoes. Once in a regular season game, the Lakers will Bruce Lee's family went to the Staples Center, Kobe wearing this commemorative version of the shoes debut.

For several years in succession, China has always been the head of Nike "Huadan" Bryant summer must-visit places, showing the importance of the Chinese market to Nike, Kobe Bryant has naturally become the focus of most Chinese fans. This summer, Nike arrangements to NBA star in China in addition to focusing on Bryant this dazzling star, the size of its star to China team will also be increased to six, when Durant, Bryant, Wade, Paul, Anthony, James NBA players and other NBA will be opened in 13 cities in China. In view of this, Nike is the success of the summer NBA star China to see the success of the campaign to see the result, and therefore determined to expand in the Chinese market this year, a wider range of "encirclement and suppression."

Adidas main push last year is from the All-Star Orlando superstar Howard Orlando center, which is Howard came to China for two consecutive years. This year has not yet seen the adidas NBA star China's detailed plan, however, due to the menacing Nike this year, I believe Adidas will certainly respond.

Since 2009, Peak has maintained the most star brand in China's record, the signing of the players covering all aspects of the basketball court - shooting guard, small forward, power forward, center, point guard, etc., the formation of the Peak Star team team "PEAK TEAM". Therefore, many Chinese fans have been looking forward to Olympic 6-7 star every year to form a team to host some performances. However, due to NBA regulations, NBA players are not permitted to participate in games outside the NBA. Therefore, Chinese fans witness "PEAK TEAM's desire to come to China can only be defeated."

"Although PEAK TEAM's desire to come to China to play a few games can not be achieved, one of China's Olympic signing stars will be eagerly awaited by Chinese fans this coming season, just as he helped the Mavericks win an NBA championship this month. Germany.

Zhang Jinjiang is a veteran of NBA fans, although the two companies are the boss, but usually like a basketball shoes, basketball uniforms dress. Like most fans, Mr. Zhang this year, especially looking forward to Kidd to Quanzhou, for which, usually used to wearing international brands, he especially purchased a pair of shoes with Kidd image. "I used to think that Kidd was old and did not pay attention to signing with his domestic brand. He did not expect him to play more and more, and eventually stood on the stage of the championship," he said.

Well-known basketball net evaluation person Kuang Baoqiang that, in addition to Bryant, Kidd will be the most NBA star in China this year, the Chinese fans concerned about and loved the star. "Kidd is a member of the Future Hall of Fame, even if Kidd does not have the title, and the 38-year-old Kidd is now a winner, unlike the late-hug-thigh-winners who started the team and were the team Indispensable brain. This is a miracle! "He said.