German man Joerg Sprave has a special hobby, playing slingshots. But this is not the kind of slingshot we used to shoot at the school with a paper ball as a bullet. As you can see from the pictures and videos in this article, the slingshot he plays is much more powerful. It is simply doubtful that he was a school bully with a slingshot everywhere. Today, Sprave even started to make a living â€“ he created a slingshot channel â€œThe Slingshot Channelâ€ on the video site Youtube. 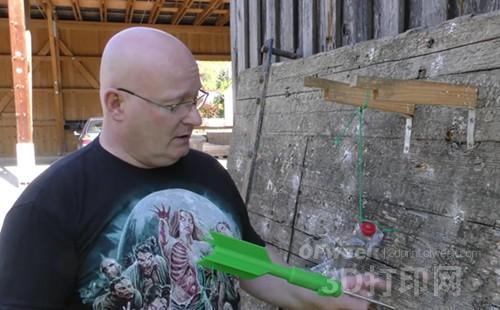 Recently on Sprave's slingshot video channel, he showed off one of the world's longest slingshots, as well as 3D printed projectiles. It is actually a thing like a small rocket, but it has a big top. Nails, which make it a daunting weapon. So why does Sprave have to do such a thing? It turned out that as the "slingshot master" on the Youtube platform, Sprave has attracted the attention of the people. Not long ago, the person of the 3D printing online platform MyMiniFactory took the initiative to contact him and was willing to print what he used in the video for his 3D. Sprave designed such a small rocket to hand over to MyMiniFactory for printing.

Sprave is very happy with the 3D printed rocket, so his next step is to make the world's longest slingshot to launch the rocket. He used a Proxxon machine to engrave the trigger part and the slingshot fork and gave it a huge rubber band. In order to ensure the accuracy of the slingshot launch, he tied a long wooden stick to play a similar shot to regulate the flight path of the small rocket, so that the longest slingshot in the world is completed!

However, since the rocket used an internal fill structure for 3D printing, it was disconnected during the first test. But that's okay, the second time MyMiniFactory used a 100% fill rate to print an almost solid rocket. Sprave works very well. As you can see from the video below, it goes straight through the target bottle. Nailed on the wooden wall.